‘Housing is out of control’

Greening Greenfield and Franklin County Continuing the Political Revolution (FCCPR) continued to emphasize that too many people can’t find high-qual-ity, affordable housing locally during sessions two and three of their nine-session virtual series, “Housing is a Human Right: We Can Make It Happen.”

On Wednesday and Thursday, the groups invited people to speak about topics like incarceration, homelessness, addiction and affordable housing versus public housing.

Gina Govoni, executive director of Franklin County Regional Housing and Redevelopment Authority, said while there are housing units throughout the county, and there are federal and state housing vouchers available to prevent homelessness, there aren’t enough.

“Housing is out of control,” she said. “We are doing all that we can, but some properties need an overhaul. We need more housing, but developments take time to build. We need to keep finding creative solutions to affordable housing.”

Govoni said, at this point, Franklin County needs about 1,200 units to satisfy demand.

“It’s even worse in other counties,” she said. “I see a 2,300 housing deficit over the next two to three years.”

Peggy Vezina, a woman in recovery who works with others in similar situa-

tions within the community, said people need to experience “home” and feeling like they belong.

“So many in recovery don’t experience those things, including having somewhere safe and comfortable to live,” said Vezina, the former director of The RECOVER Project.

Everyone who attended the virtual forum agreed that those who are released from jail or are in recovery, or are in the midst of homelessness, encounter too many barriers to finding decent housing.

Realtor Trenda Loftin, who is involved with The Compost Cooperative in Greenfield, which provides formerly incarcerated people with jobs as owners/members, helped the nonprofit buy a house where some of the owner/members can live.

“Other issues incarcerated people have to think about when they’re released are making a living wage, access to food and transportation, and more,” she said. “Those are difficult to obtain if you don’t have housing.”

“Many across the world assume housing to be a right, as they do food, medical care and clothing, but not in the United States,” Selwyn said. “So many people are living without housing.”

Traci Talbert, one of the guest speakers, said she worked in banking for many years and saw the racial injustice and inequities, the financial disparities. She said the bulk of debt is experienced by people of color, as are overdraft fees and interest fees, for instance, keeping many poor.

She explained that while affordable housing is housing that takes 30 percent or less of someone’s income to cover each month and may be a little nicer than other types of housing, public housing is controlled by the government, which can decide to segregate and decide where it will be built. Privately owned housing is housing where a landlord might accept Section 8 vouchers and receive tax breaks.

Talbert said when people hear the words “affordable housing,” they immediately go into a “not in my backyard” mentality, and fight against it.

Public housing, according to Talbert, is detrimental to people’s health much of the time — there are no local grocery stores nearby, no transportation, no opportunities. Instead, there are liquor stores, parks without swings and abandoned buildings.

“What happens in those neighborhoods?” she asked. “What are the attitudes of the people toward those who live there?”

Gianpaolo Baiocchi, a New York-based scholar and activist and the other guest speaker, said a lot of housing d o e s n’t even meet human needs, but instead generates more wealth for the wealthy.

He said housing needs to not be treated as a commodity. Rather, Baiocchi suggested that there be a move toward “social housing” that is community controlled and publicly backed financially.

“I see an opportunity for activists like you to make a push for it,” he told those attending.

He agreed with Greenfield Community and Economic Development Director MJ Adams when she said that a lack of housing is not a “housing crisis,” but rather a structural issue.

“If it were a crisis, we’d be able to resolve it,” she said.

The next forum, “Resident-Owned Communities: One Housing Answer,” will be held Thursday, April 15, at 7 p.m. on Zoom. For the link, visit housingishumanright.com and register. The virtual forums will run through May 19. Reach Anita Fritz at 413-7729591 or afritz@recorder.com. 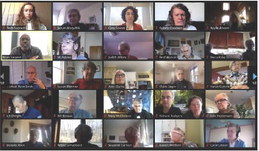 Greening Greenfield and Franklin County Continuing the Political Revolution (FCCPR) are holding a virtual series of forums on affordable housing options and development throughout the county.

Click here to see this page in the eEdition: